Job Growth Disappoints But We Are Still Moving Forward

Nonfarm employment increased by 162,000 jobs in July, which was below expectations. Hiring improved across a broad assortment of industries but is still weighted toward four low-paying categories. Retail trade, restaurants, temporary help firms and home health care combined to add 96,800 jobs in July. These four industry categories account for 21.7 percent of nonfarm employment but accounted for close to 60 percent of the jobs added in July.

Manufacturing payrolls increased by 6,000 jobs in July. The stronger ISM report had raised hopes for an even larger gain, as fewer than usual assembly plants were closed for their model year changeover. Hiring in motor vehicles did pick up, rising by 9,000 jobs, but cutbacks elsewhere limited the overall gain. Notable weak spots include food processing, which eliminated 5,500 jobs and computer and electronic products, which cut 3,200 jobs. Average weekly hours and overtime hours in manufacturing, which tend to lead changes in employment, both fell 0.2 hours.

A Drop in Layoffs Is Pulling the Unemployment Rate Lower

The continued slide in the labor force participation rate has caused many people to dismiss the drop in the unemployment rate. This would be a mistake. The drop in the unemployment rate does reflect important changes in the labor market and has real implications for the economy. The number of unemployed has fallen by 1.2 million over the past year, with nearly all of the the decline occurring among persons that had lost their previous jobs. This decline is also consistent with the weekly unemployment claims data, which have recently fallen to post-recession lows. By contrast, there has been very little improvement in unemployment among persons first entering the workforce, those re-entering the workforce or those that voluntarily left their last job. With layoffs down, workers that have good jobs today likely feel more secure about their job prospects and are more willing to move forward with purchases of cars, home appliances and even homes that were put off when labor market conditions looked less certain. The drop in the unemployment rate is probably more significant to those that already have jobs than those that are currently looking for one.

As far as the Fed is concerned, this morning’s job figures are not a game

changing event. While the numbers were not as strong as the markets had hoped, another month’s jobs gains and further drop in the unemployment rate mean the downside risks to the economy are continuing to diminish. 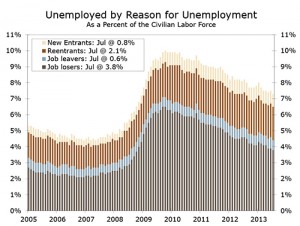