By Mark Vitner, Senior Economist and

Builders Are Having a Tough Time Keeping Up With Demand

New home sales rose a larger-than-expected 8.3 percent in June to a 497,000-unit annual pace. Sales for the prior two months were revised down by 38,000 units, but both months still show sequential increases, indicating that new home sales are continuing to build momentum.

June’s strong gains in new home sales may allay some concerns that higher mortgage rates are undermining the budding housing recovery. Earlier this week, sales of existing homes posted a 1.2 percent drop for June. The report raised fears about the prospects for first-time home buyers. We noted then that most of the drop in existing sales occurred for homes priced below $100,000. A big part of the drop in existing sales also appears to have been due to a drop in investor purchases, distressed sales and cash purchases. The low end of the existing market has been dominated by institutional investors bent on buying up bargain-priced homes and converting them into rental properties. Most of the desirable existing properties at the low end of the market are now gone, which is good news for home builders. Moreover, the exit of institutional buyers should be good news for first-time buyers, many of which were having difficulty competing with cash offers.

The latest new home sales data seem to confirm these trends. Sales rose in every region of the country except the Midwest, and in every price segment except the $300,000 to $399,000 range, where they fell marginally. Sales of homes priced under $150,000 rose marginally in June and accounted for 10 percent of sales, which is the same percentage they accounted for in the prior month. While the share has dropped from 16 percent in 2011 and 13 percent in 2012, much of the drop is due to the growth in sales in the West, where lot prices and homes tend to be more expensive. The West has seen its share of sales rise from 23.5 percent in 2011 to 26.4 percent through the first six months of this year.

Rising mortgage rates will clearly have an impact on sales. Mortgage purchase applications fell 2.1 percent in mid-July. The figures also show that the contract interest rate on 30-year fixed rate mortgages has risen by nearly 75 basis points over the past year, with much of the gain occurring in the past two months. But even with these increases, mortgage rates remain near historic lows. One way that buyers adapt to rising mortgage rates is to scale back the size of the home they buy. This would be consistent with the small drop in the share of sales accounted for by homes priced over $400,000 during the past two months. 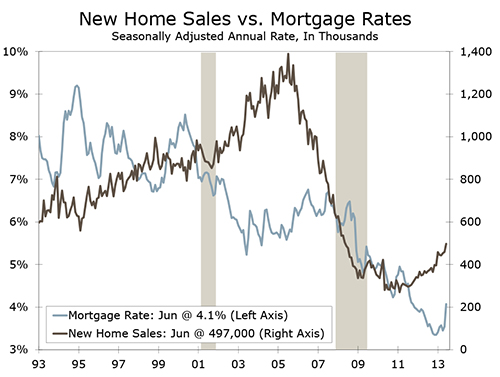 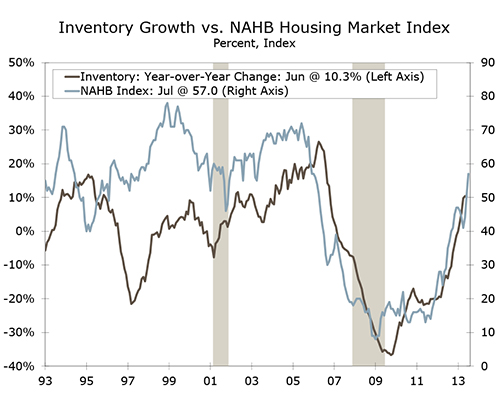 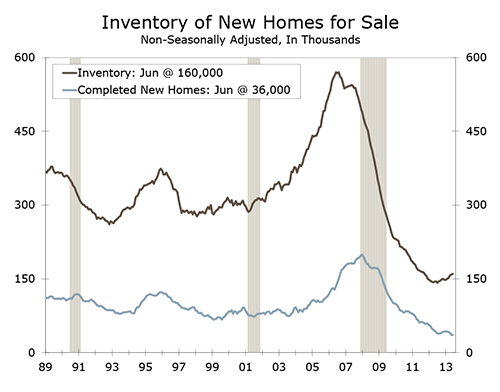