Are Rising Mortgage Rates Taking a Bite Out of Home Sales?

July’s 13.4 percent plunge in new homes sales to a 394,000-unit pace may mark an uh-oh kind of moment for the housing recovery. The drop itself 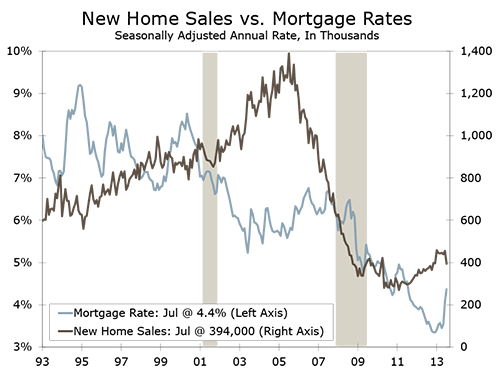 was the largest since May 2010. Not only did new home sales tumble in July but sales for the three previous months were revised sharply lower. The consensus estimate for new home sales had been for a slight drop from a 497,000-unit pace in June to a 487,000 pace in July. Actual sales proved to be nearly 100,000 homes below expectations.

While rising mortgage rates have likely cooled demand in certain areas of the housing market, we are skeptical that they have made as much of a difference as July’s new home sales figures suggest. Builders have generally reported rising order backlogs, and buyer traffic is the best that it has been in at least five years. It is certainly plausible that the rapid increase in mortgage rates over the past few months has led to an increase in contract cancelations, which would help explain the large downward revisions to the April, May and June sales figures. Rising mortgage rates would also make it more difficult for many first-time homebuyers to qualify for a mortgage and also might dissuade some trade-up buyers worried about selling their current home. While all this makes intuitive sense, it does not tend to jibe with other data or anecdotal reports from builders.

Another possible explanation, and one that we continue to subscribe to, is that the unusually rainy weather in the South, which accounts for more than half the nation’s new home sales, has cut into sales activity this spring and summer. This past spring and summer has been one of the wettest ever for the region and the weather had not improved through mid-August. Not only does the rain tend to keep buyers away but it also has led to delays in new home construction and that cuts to the real heart of the problem in new homes sales: there simply is not much inventory. The data tend to support this notion. Sales of completed new homes and sales of homes currently under 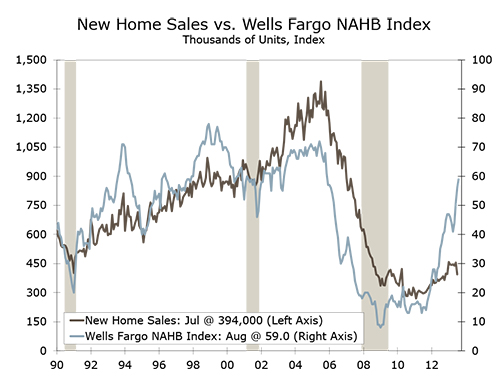 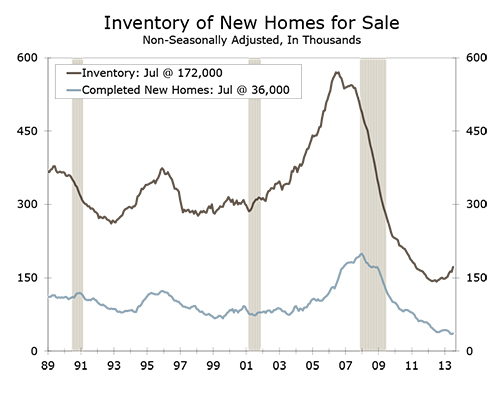 July, while sales of new homes not yet under construction were largely unchanged.

Despite July’s huge drop in new home sales, we feel it is too early to conclude that higher mortgage rates arechoking off the housing recovery. Anecdotal reports from builders simply do not reconcile with the latest figures and, while higher, mortgage rates are still near generational lows.Inventories remain exceptionally tight but should improve in coming months. Overall inventories increased by 10,000 units in July to 172,000 homes. Half of that increase, however, was in the “not started” category. The number of homes under construction also increased, but the number of completed homes for sale at the end of July remains near its all-time low. Moreover, the number of months it took for a completed home to sell plunged 0.6 months to 3.5 months in July.