Oil- and gas-related businesses are cutting capital budgets and implementing layoffs in the face of the continued slide in oil prices. The bulk of the burden is falling on just a handful of states.

The ongoing fall in oil prices will hurt domestic producers squeeze their profits and reduce their capital spending and exploration efforts. Producers are not the only ones who will feel the squeeze. The decline in capital spending and exploration will also hurt support businesses, manufacturers of related equipment, and possibly spill over to firms that build pipelines, transport oil and sell the commodity. Weakness in the domestic oil and gas industry has contributed to a downward adjustment of our forecast for business fixed investment for the first quarter of 2015. The sharp pullback in oil- and gas-related investment and employment will largely be concentrated in energy producing states, while the benefits of cheaper gas will be more equitably divided among the entire nation.

In dollar terms, Texas is likely to suffer the largest loss. The Lone Star State has by far the largest number of workers in each of the oil- and gas-related industries. However, it does not have the highest concentration of those workers as the state is relatively large and diverse economically. In Texas, only 2.6 percent of workers are employed in oil and gas extraction, drilling oil and gas wells and support activities for oil and gas wells. By contrast, 6.0 percent of North Dakota’s workers are employed in those three industries, while 5.8 percent of workers in Wyoming are concentrated there. Moreover, Alaska, Oklahoma, New Mexico and Louisiana all have a higher concentration of oil and gas workers than Texas. Support for oil and gas operations has been the largest and the fastest growing oil-related industry in the U.S. by employment. As spending cuts become more evident in the data, this industry will significantly restrain job growth in many of these states.

The pain of capital spending cuts will reach beyond those in the business of extracting oil. Oil and gas machinery manufacturers will feel the squeeze of reduced demand. Employment data on this industry are not available for several states, including Wyoming, North Dakota, Louisiana and Alaska; however, nearly 80 percent of all workers in the industry are employed in either Texas or Oklahoma.

The construction of oil and gas pipelines, pipeline transportation and petroleum wholesalers could also be at risk, though cuts to these industries are unlikely to be severe if the momentum in oil production does not slow this year. Pipeline construction is most heavily concentrated in Wyoming and North Dakota, with a slightly smaller concentration in Louisiana. Wholesalers and pipeline transportation are relatively small employers, but still account for a sizable share of the workforce in Wyoming, North Dakota and Oklahoma. 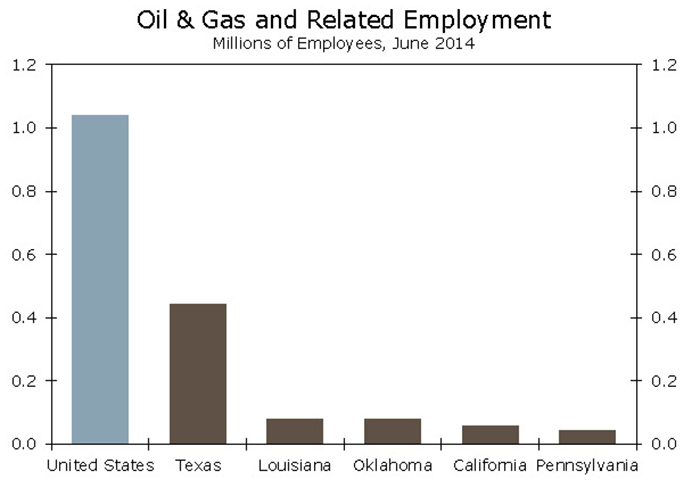 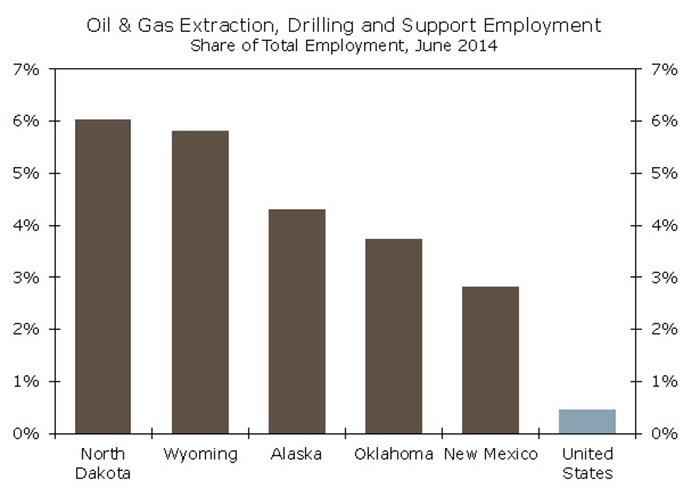 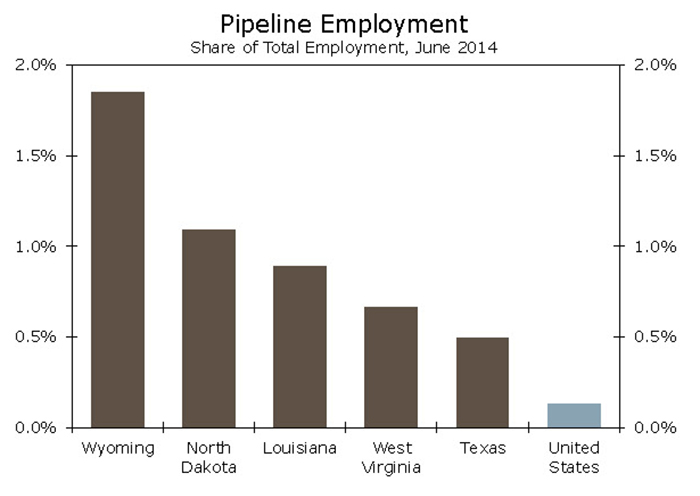