Although a 9,500-job monthly gain may seem small by Texas standards, job gains disappointed at the national level in March as well. The better household data provided some consolation in the U.S. report, but less so in Texas, where the jobless rate rose 0.1 percentage points to 5.0 percent as labor force growth outpaced employment growth.

Texas posted the third largest job gain among all states. Revisions to February were significant, bringing Texas’ three-month average job gain to 25,000. The details of the March data also tell a better story than the headline. Most major sectors added jobs. The largest gain was in professional & business services, which added 13,200 jobs, with large gains in both professional & tech services and administrative support positions. Financial services also had a strong month, adding 2,800 jobs in March. Even with solid hiring in government, information and education, service sector employment declined by 1,000 jobs in March. Gains were offset by a 12,300-job decline in the leisure & hospitality sector, which may have been impacted by seasonal factors. This year’s relatively late Easter pushed Spring Break out into mid-April, resulting in less seasonal hiring than usual in March. There was a large decline in health employment on the month, although the sector remains one of the strongest growing over the year. Cuts in March were likely a one-month blip.

In a reversal of sorts, goods producing sector employment was up broadly in March. Mining & logging added 4,800 jobs, reflecting the ramp up in drilling activity in the Permian Basin. The rig count has steadily climbed higher since bottoming out last May. Construction employment rose by 4,000 jobs in March—also likely reflecting the improvement in the energy patch as well as continued gains in homebuilding and commercial construction. Manufacturers added 1,700 jobs in March and February’s gain was revised up to +6,400 jobs. March marks the first month that Texas’ manufacturing employment was above its year-ago level in nearly two years.

The bottom chart illustrates some of the impact of the energy boom and 105 subsequent bust. Houston’s employment remains essentially flat with its 100 December 2014 level, which is a testament to efforts to diversify its economy beyond fossil fuels. It appears to have paid off. The energy bust did take a bit out of Houston’s momentum, however. We expect the region to return to growth mode rather quickly now that oil prices have stabilized and drilling activity is ramping back up. Manufacturing faces a longer road to recovery, as headcounts are still 5.1 percent lower than peak in December 2014, though the upward trend is encouraging. Mining & logging employment in Texas has returned to where it was back in 2012, right at the beginning of the shale boom. With oil prices seemingly stuck at around $50 a barrel, oil producers are becoming even more efficient, which means employment will likely come back slower than production does. 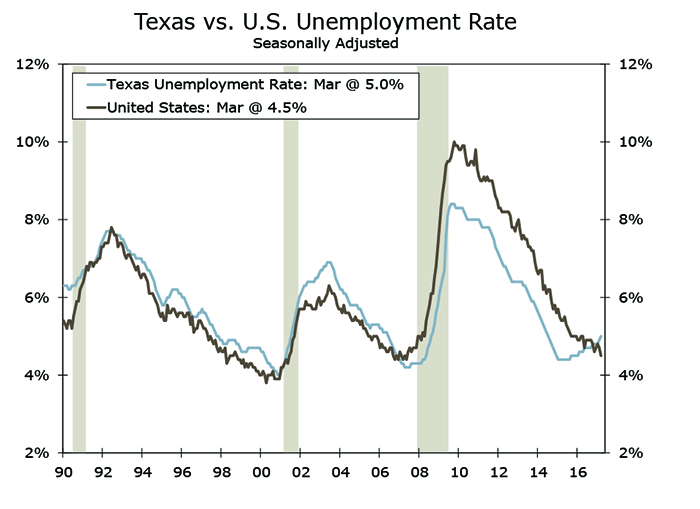 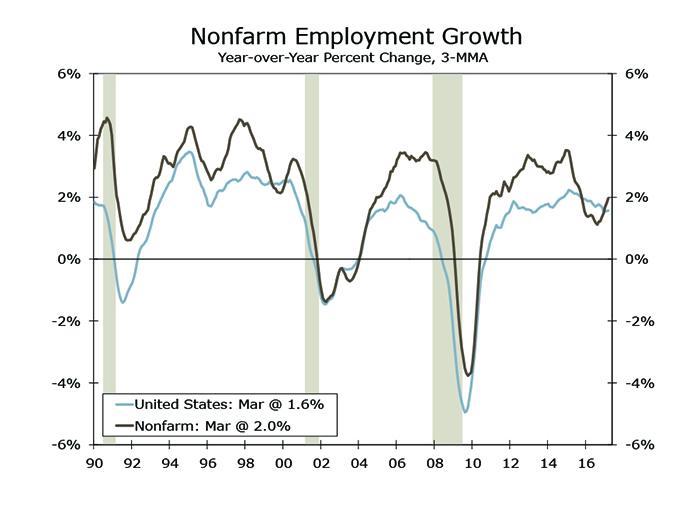 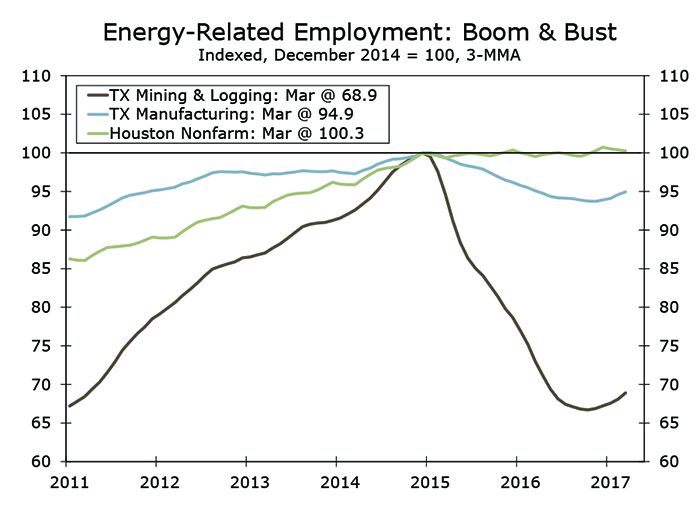