A quick check with the Psychics & Mediums Network reveals some startling predictions for 2010:

At home in Wisconsin, the P&M Network offers no insights on the future – especially the state’s construction market. 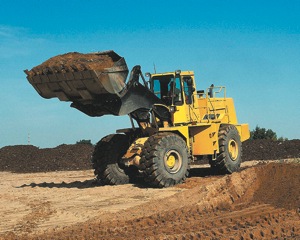 Our panel of Wisconsin experts included:

Each of our trade association leaders was asked a handful questions about how they see 2010 shaping up … their forecasts for the year.

How has the market started to rebound?

“Wisconsin’s transportation construction industry is cautiously optimistic that the market will show stability in 2010, but there are significant funding issues over the longer term at both the state and federal levels,” Goss states. “Boosted by nearly $300 million in project lettings under the federal American Recovery and Reinvestment Act, Wisconsin finished 2009 with a let level of $1.2 billion. This represented a significant increase over the 2008 let level of $792 million and is a testament to the strong public-private partnership that exists in the badger state to advance a proactive infrastructure investment agenda that we hope to see continued through the next year.”

McMullen reports: “The only signs of a rebound that I can see for the concrete paving industry is the Wisconsin Department of

Transportation (WisDOT) 2010 construction program. It is very good for our industry considering the current economy and the complete slowdown of construction activity in other sectors. We have a very good state budget and highway program with WisDOT.”

According to Wanta, the Milwaukee market appears to be emblematic of how the state is faring. “Our actual reported work hours for the six-county Milwaukee area were flat in 2009. Fortunately we have large ongoing sewer projects being built by the Milwaukee Metropolitan Sewerage District and other utility projects relating to We Energies.” Wanta continues, “For 11 months ending October 31, 2009, work hours totaled 1.2 million versus 1.1 million during the same period last year.”

Is stimulus funding being applied to any market segments?

“Boosted by nearly $300 million in project lettings under the federal American Recovery and Reinvestment Act, Wisconsin finished 2009 with a let level of $1.2 billion,” Goss reports. “This represented a significant increase over the 2008 let level of $79

2 million and is a testament to the strong public-private partnership that exists in the badger state to advance a proactive infrastructure investment agenda.”

According to Goss, the Wisconsin Department of Transportation ramped up quickly to meet the tight obligation deadlines in the federal stimulus bill, and the consultant engineering industry mobilized to deliver a range of projects at the state and local levels. “This work helped stabilize the construction industry during a year fraught with economic uncertainty. There have been a lot of questions raised about the number of jobs created by the stimulus bill, but many state contractors credit the stimulus work for at least helping them maintain their workforces at the previous year’s level.” 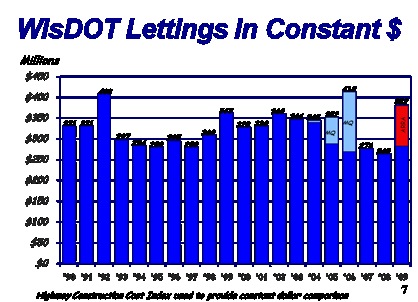 Goss continues, “On an inflation-adjusted basis, the stimulus lettings enabled Wisconsin to have the third-largest transportation construction program in the last 20 years. Without the stimulus bill, the constant dollar value of the program would have been among the lowest in 20 years because of successive years of double-digit construction inflation before the current economic downturn.”

McMullen reports, “The concrete paving industry has benefitted from the stimulus funding. Approximately 1.1 million square yards of concrete paving was added to the Wisconsin Department of Transportation’s (WisDOT) 2009 paving program. This amount of work took us from what appeared to be a very below average year of paving to an average year.”

Continuing, McMullen states, “The 2010 WisDOT program currently contains approximately 550,000 square yards of concrete paving being funded with stimulus dollars. These are projects on state highways. WisDOT had a December 1, 2009, deadline for all projects on the local system. The municipalities were under very tight time frames to complete plans, specifications and estimates on these projects. We are anticipating that the Department will announce the additional construction quantities to be funded by the stimulus dollars in early January 2010.”

For Wisconsin underground contractors, Wanta cautions: “We have not seen any appreciative federal stimulus money in southeastern Wisconsin relative to sewer and water work. We fear that some municipalities may be using stimulus money to balance their budget or pay for projects already designed last year.”

“The concrete paving market, when considering all three market segments – highways, airports and streets/local roads – looks like it will settle out somewhere between 4.0 [million] and 4.5 million square yards,” reports McMullen. “This is an average year for Wisconsin contractors and is certainly well below the capacity of the industry in Wisconsin.”

Wanta offers a few expectations for the year: “The city of Milwaukee 2010 projected sewer miles to be installed or lined is 15.52 miles, 9 percent less than the miles initially projected for 2009 (17 miles), but 12 percent more than currently projected for 2009 (13.8 miles). The Milwaukee Metropolitan Sewerage District will bid a 17-mile methane pipeline from Muskego to Jones Island in spring 2010. And perhaps the city of Waukesha will start on their $78 million water project that includes 30 miles of pipeline.”

“We expect the overall level of public transportation construction in 2010 to closely mirror that of 2009, helped by the second season of projects funded by the federal stimulus bill,” Goss says. “Most of these projects will be at the local government level. The caveat in all of this, however, is funding during what is expected to be a slow economic recovery.”

Goss continues: “Motor fuel consumption in Wisconsin declined last year by 3.7 percent. It was the fourth year in the past five
years that the main source of transportation funding in the state has declined, reflecting fewer freight shipments and motorists

migrating to more fuel-efficient vehicles in the face of volatile gas prices.

“With no increase in the state fuel tax in more than three years, the buying power of our primary transportation revenue is declining at the same time other states are diversifying their transportation revenue base to help grow their economies.” Goss concludes, “With ‘jobs and the economy’ rapidly becoming the focus of the 2010 elections for governor and the legislature, our industry will be emphasizing to all candidates that the state’s overreliance on fixed highway user fees is the key impediment to building a multimodal transportation system that promotes a growing economy.”

Have delays in reauthorizing the Highway Trust Fund bill and the Clean Water & Drinking Water bill had an impact on construction for your members?

The delays have had an impact on Wisconsin contractors, according to McMullen: “There continues to be significant concern that the combination of the previous highway authorization, SAFETEA-LU, and the ARRA stimulus dollars is a one-time funding event. Therefore, I see very conservative approaches by the contractors. I do not see companies adding crews or buying new equipment due to the presence of the stimulus dollars.”

He continues, “The approach appears to be that if they get the additional work they will accomplish it with the staff and equipment they currently own. The further delay in the highway trust fund bill will keep the contractors in this mode.” McMullen asserts that “it is imperative that the bill moves forward quickly. The industry needs a six-year snapshot of what to expect before they will take the risk of expanding. They also need to know that the Wisconsin DOT will have the money for engineering and that the projects will begin to flow at the higher funding levels being proposed by Congress.”

Goss points out that “Congress faces a similar dilemma in keeping the federal government a strong partner with states in building a transportation system that connects the nation and moves commerce. The surface transportation bill expired in September and has received a series of short-term extensions because Congress can’t agree on how a new long-term bill should be funded. Plans for a six-year, $500 billion bill have been stymied by the fact that the current 18.4-cent federal gas tax falls woefully short of generating the necessary revenues to adequately fund the measure.”

Wanta, in reference to clean water and drinking water initiatives, states: “Most of the 2009 federal funding for sewer and water improvements went to upstate Wisconsin communities. However, we are expecting good things in 2010 as President Obama signed into law $2.1 billion for collector and interceptor sewer and treatment plant work (a 205 percent increase over 2009) and $1.3 billion for drinking water projects (a 67 percent increase over 2009). Hopefully Wisconsin municipal water and sewer utilities will take advantage of these 20-year subsidized loans to repair and replace their tired sewer and water systems. We have not seen this level of federal funding in over 25 years and it cannot last too long. This is a window of opportunity that comes once in a generation for municipal utilities to get their projects done.”

What trends do you see developing?

Wanta sees that now is a good time for owners to get work done. “Contractors are bidding low to keep people employed and to pay their bills. There are upwards of 14 bidders on public works construction, which can save municipal utilities big money. Smart municipal engineers will take advantage of this weak market to bid and build projects. It will not get any cheaper for the owner.”

Wanta points out that “eventually utilities will make the improvements in sewer, water and natural gas services as they are meeting basic needs of the consumer. With federal tax credits recently signed into law, the housing industry will also improve and provide associated utility work. The construction industry pays family-supported wages, health, and even pension benefits. These jobs pay more than the service sector and provide more tax revenue for the communities and the state. Contractors buy materials, rent or buy equipment, purchase fuel, and provide a lot of ancillary jobs in the economy. The sooner utilities get back to bidding and executing construction contracts, the sooner we will see an improved economy throughout Wisconsin.”

The window is a bit foggy for Wisconsin Concrete Pavement Association members, according to McMullen. There was a decline in the number of municipalities bidding concrete paving projects from 2008 to 2009. “For 2010, it is a bit of a mystery yet on the local streets and roads market. We are not anticipating growth in this market.”

McMullen concludes, “With WisDOT projects we look at both the number of projects and the size of the projects. The number of projects from 2009 to 2010 looks to be about the same but the mix in size of the projects is much better. The 1.1 million squares in stimulus projects added in 2009 was four large paving projects. If you look at the WisDOT program for 2010, they have a much better mix on the size of projects. This is good news because it will keep all sizes of companies bidding WisDOT work. The concrete paving industry continues to be very competitive with multiple bidders on every project. This is good for the citizens of Wisconsin.”

“While the federal stimulus bill has stabilized the public transportation construction market in 2009 and 2010, the longer-term future will remain cloudy until these funding uncertainties at the state and federal levels are resolved,” reports Goss.

“Contractors will not be making long-term investments – in workers, equipment and other capital purchases – until they have greater certainty about the long-term prospects for transportation infrastructure investment,” Goss concludes.

This article appeared in the January 2010 issue of Western Builder, an ACP regional publication.