According to show management, the 2009 World of Asphalt Show & Conference and AGG1 Aggregates Forum & Expo, now being held (March 9-12) in Orlando, FL is an overwhelming success even in tough economic times. 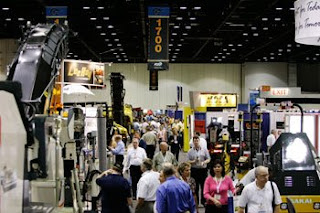 The combination of asphalt and aggregates was a natural fit, noted show organizers, with the industry partnership benefiting both events. The 2009 World of Asphalt, which is geared toward asphalt, highway maintenance and traffic safety industry professionals from small to large contractors, materials producers, state and agency specifiers, maintenance companies, manufacturers and service providers, experienced increased traffic, compared to the last show, with about 3,650 industry professionals in 2007. And, it was a great start for the inaugural AGG1.

“The convenience and cost savings of one industry gathering place for the year made more sense than ever in this down economy, for all participants, noted show director Sara Truesdale Mooney.

“The mood on the show floor was cautious, yet positive,” she stated. “We know this is a difficult economic environment, but our attendees are looking ahead and preparing for the future. They knew they’d find the education, networking and products they need to succeed through this year and beyond to an upturn.”

“These have certainly been turbulent times, but the numbers attest to the continued industry support for and confidence in the World of Asphalt and the new AGG1,” Mooney stated.